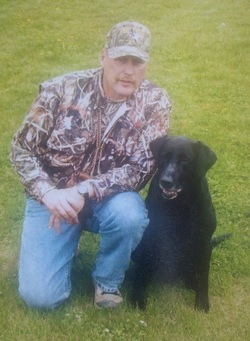 Jim grew up in Ohio hunting waterfowl with his dad and brothers.  As  a  small boy, he can remember his first trips to the duck blind with his  dad and his  retriever.  He knew, after that first hunt, he would
purchase his own duck dog  one day.  This happened in 1978 when he  graduated from high school.

He  came from the background that if  your dog did not see where the bird landed, you  would throw a rock for  your dog to find it.  So that is  how his firsts dogs were trained,  but in 1986 it all changed.

He  attended a HRC Hunt Test  early that year.   He could not believe what they were  able to
accomplish with their dogs.  He started reading everything he was able to  get his hands on and in 1987, he championed his first dog (without any  rocks), Stillwater Shady Jake.  This was the first dog championed in the State of Ohio.  It has been and always will be a learning experience with every  dog.   However, there is a passion he has to not only have a good dog  to run a hunt test, but a great dog in the field.

Today, he has  continued to champion  multiple dogs from Grand Hunting Retrievers to Master Hunters.  In 1986, he  brought his passion closer to home, here  in Ohio.  He was one of four members  who formed the West Central Ohio  Hunting Retriever Club, which he is still a member of today.  He  has had years of experience in the training and handling of dogs.

Jim is available to train your dog and handle them in UKC/AKC Hunt tests.   If you are interested in having Jim train or handle your dog, please fill out  the below information.